The story goes that the Lord Shiva with Goddess Parvathy revealed themselves to a fervent devotee at this place. It is said that years & years back two old brahmins, on their way to Kashi passed through this place(Anicadu). It was a dense forest during that time. They saw a diseased cow on their way. One of the brahmins decided to take care of the cow to recover it from the critical condition while his friend continued his journey to Kashi. With his sincere & dedicated attention, the cow recovered from the disease. He was very happy and content about the fact that he could save the life of the cow, but at the same time felt sad about his incomplete pilgrimage to Kashi. While sitting near the cow with all these thoughts, Lord Shiva & Godess Parvathy revealed themselves before him and said:-

“ You need not worry about your incomplete pilgrimage to Kashi. You have performed a great sacrifice by saving the life of a being, for which we are very much pleased with you. In fact, it was godess Shri Parvathy who came before you as a cow to see how devoted you are! You can see the cow’s hoof(Kulambu) mark over the surface of the rock and the holy water flow through the same, where you have performed this great sacrifice. This holy water is the great “Kashi Theertham” and you can perform all the rituals here itself and it will be considered as good as doing it at Kashi.”

With those words, Lord Shiva & Parvathy disappeared. He performed the rituals in the Kashi theertham(Divine water from Kashi) flowing through the “Thiru Kulambu” (Holy hoof )there itself as advised by Lord and got the ultimate state of “Yogeshwaran”. The Theerthakkulam (Pond) at the north side of the temple contains this holy water flowing through the “Thirukulambu” and lot of people perform their “Pithru Tharppan” rituals at this place. Thus, the name Thiruvumplavil is formed from “Thirukulambai” as above. 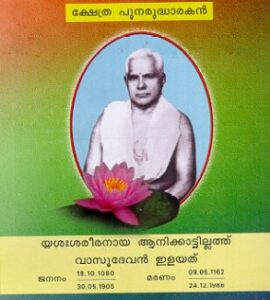 As per the available records, the first renovation project was carried out in 1119(Kollavarsham). The renovation activities were led by Late Vasudevan Elayathu, Anickattillom. Sreekovil, Valiyambalam, Thidappilli, Balikkalpura etc. were constructed and the Dravya Kalasham was conducted on 21st Medam 1121. Later in 1130, Gopuram, Office building, Theerdhakkulam were constructed. Necessary developments were made in the day to day pooja in consultation and with the advise of Temple’s Thanthri. In 1994, Gopuram was constructed at the South Gate of the temple. In 1995, the ‘Devaprashna Parihaara Kriyakal’ were carried out in the leadership of Brahmasree Manayattattu Vasudevan Nampoothiri & Bhagavathahamsam Brahmasree Malliyoor Shankaran Nampoothiri. During the period from 1996 to 2000 a lot of renovation activities including Sreekovil, Chuttambalam, Upadevatha puna-prathishta, Chuttuvilakku, Balikkal prathishta, Dravyakalasham etc were carried out. In 2001, Theerthakkulam was developed further together with Baliththara for the convenience of devotees who come here to do the Pithru Tharppan